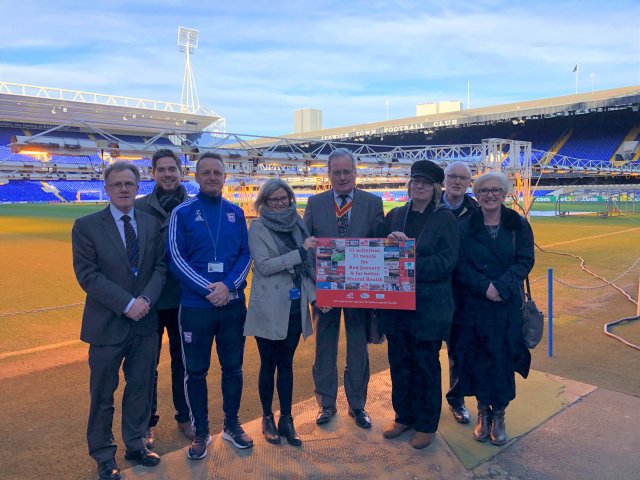 Blue Novation, the Suffolk based company were presented with tickets to this weekend's game at Portman Road after being highlighted by Active Suffolk, for their commitment and efforts in completing the recent RED January challenge.

RED January, is a national initiative led by Mind Charity which aims to get people active in the first 31 days of the year in an attempt to beat the January blues. Suffolk Mind led on this campaign locally to encourage Suffolk residents to sign up, participate and raise funds for the charity who deliver local services to support those living with poor mental health. This year Suffolk Mind also joined forces with partners including, the Public Health Team at Suffolk County Council, OneLife Suffolk, Abbeycroft Leisure and Active Suffolk.

Lizzy Tuthill, Community Fundraising Coordinator at Suffolk Mind said: "We're so grateful to all the agencies involved for helping us make RED January a success.

"RED January is an initiative encouraging people to challenge themselves to get active every day, their way."

Throughout the month of January, alongside the work of Suffolk Mind, Active Suffolk led on a social media campaign which encouraged local people to do some physical activity each day. It was here where Blue Novation were recognised for their involvement in the campaign where they shared daily Tweets of the activity the team had been carrying out.

Trudy Sore from Blue Novation, said: "We really enjoyed getting involved with RED January and we are so pleased to have been awarded the tickets for our effort.

"For us, in addition to the obvious benefits of being active, the time away from our desks and the fresh air, really improved our mood. In fact, our favourite activity during the month was a walk where we banned mobile phones! – It helped us to all really switch off and take in our surroundings"

Survey results from 2018 showed that 87% of those who took part in the RED January challenge felt better both physically and mentally. It is for this reason that so many partners were keen to be a part of the local initiative.

Cllr James Reeder, Cabinet Member for Public Health and Prevention, said: "There is a clear link between physical exercise and mental wellbeing which is why Suffolk County Council signed up to Suffolk Mind's Red January challenge this year, encouraging employees to be active during the working day. We're pleased with how actively involved our employees have been with the challenge, organising stair runs, lunchtime walks, walking meetings, and even yoga sessions!

"Led by the Most Active County Partnership, Suffolk is fortunate to have a rich and diverse range of activities on offer to support people to be more active. Look out for events and activities taking place near you, including Move Suffolk Week which returns this May!"

In addition to the partners and workplaces that were involved in the RED January campaign, thousands of local people also engaged with the activity shared on social media with many Suffolk residents sharing their efforts for the chance to win a Fitbit, as part of the ongoing Suffolk How Are You campaign, run by Suffolk County Council and Ipswich and East Clinical Commissioning Group.

Cllr. James Finch, Chairman of Suffolk County Council, said: "I am pleased to be able to celebrate all those individuals who took part in a very successful RED January.

"When I nominated Suffolk Mind to be my Chairman's charity for the year, I experienced first-hand the real power that physical activity has to improve your own mental health. Over the summer I completed my 10 sponsored walks for Suffolk Mind along the entire length of the Stour Valley Path, walking with groups of family, friends and fellow fundraisers from Newmarket to Cattawade. I'm really pleased to see so many others are also discovering these benefits too."