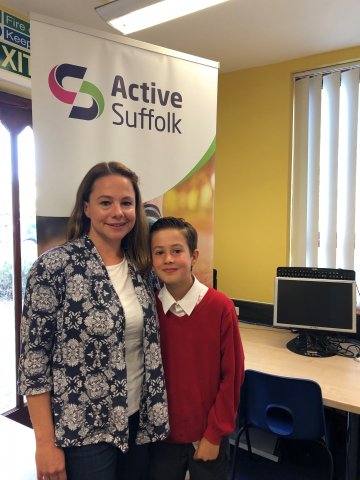 Last week, just a few months since our TV appearance in the summer, we were asked by ITN to help them showcase the fantastic work being carried out in Suffolk's schools to tackle childhood obesity and physical inactivity in response to the report released by the Chief Medical Officer.

The Active Schools project is a programme which is being led by Active Suffolk to tackle childhood obesity in key primary schools across the County. The project is a partnership between Active Suffolk and NHS West Suffolk and NHS Ipswich and East Suffolk clinical commissioning groups (CCGs) which will run for three years. It is reported that 15% of children in Babergh and Mid Suffolk districts are obese, with even more living with excess weight and the associated health risks that this presents. Addressing this problem at a young age will help children live longer, happier and healthier lives, reducing future healthcare costs and improving quality of life. In addition to the £16k p.a. primary schools in Suffolk receive from the Department for Education to support physical activity delivery, the Active Schools programme seeks to provide targeted support with bespoke solutions for the schools taking part.

After a successful launch in the summer, we are now working in several schools in key target areas within Suffolk, including St Gregory's Primary in Sudbury which is where we were invited to meet with ITN last week. The invite, was prompted after the release of the report by the Chief Medical Officer which suggested various ways in which we could help reduce the likelihood of childhood obesity.

The crew filmed some of the parents, children and teachers that are beginning to see the benefits of the Active Schools programme in one of our newly signed up schools, St Gregorys Primary in Sudbury. Whilst at St Gregorys's Primary the children participated in the daily mile, which really demonstrated the dedication of the school to address physical inactivity and childhood obesity.

One parent told us:

"The Active Schools programme is brilliant, the school is really active and as a parent that works in the leisure industry myself I think its really fantastic that the school are encouraging exercise and getting the children out of the classroom so they can get fresh air and re set their minds."

"I love having the project here, it gives the kids a great perspective. It helps them with their mental health as well as their physical and Imogen can now identify that link herself where she will often suggest getting out for a walk as a way of improving her health and wellbeing"

The interviews were showcased on Channel 5 News last Thursday evening. We look forward to continuing to work with schools across Suffolk and seeing this project grow...hopefully more TV apparences too!