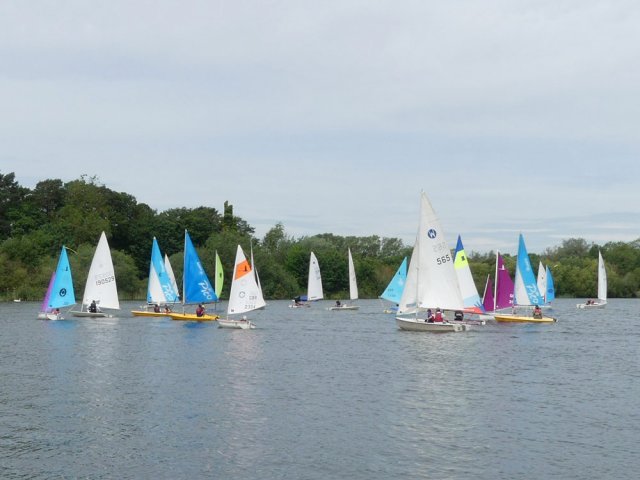 Mike Steele from SESCA said 'The event was initiated six years ago as a fun event to celebrate and coincide with Antigua Sailing Week. Through a Google news alert, the event came to the attention of the Sailing Week race committee and the Antigua & Barbuda Tourism Authority, who were so impressed with the initiative that they kindly came onboard as event sponsors. After a couple of years of particularly chilly April weather, the Regatta was moved to June in pursuit of warmer conditions.'

With temperatures rising into the upper 20s, the organisers were not disappointed. Shorts and T shirts were the order of the day, as a record 38 dinghies took to the water. Numbers were boosted this year with the inclusion of WASH Sailability's (disabled sailing) 10 Hansa dinghies, which made a colourful and welcome presence.

Racing was close, particular throughout the 12 boat Laser contingent with Jack Knight, Mike Steele and Ed Deacon battling it out at the front of the pack. Elsewhere in the fleet, Sam and young Bertie Parrett were putting on a great performance in their Wanderer, while James Green showed fantastic determination to complete the course in his Topper, despite several capsizes in the gusty conditions.

After a lunch time break with suitably Caribbean fare, the competitors ventured out for the third race, accompanied by the Calypso sounds of the steel band wafting out over the Lake. Knight secured first overall but winning this final race by a boat length from Steele, with Deacon taking third. Sheila Norman came first overall in the Toppers and first lady helm. Sam & Bertie Parrett won the Wanderers; Phil Lee won the Picos; Chris Willoughby won the Hansas, with Alan Jones 2nd and Alan Turvey 3rd; and Harry & Jack Royston won the Sea Cadets' prize.

The prizes were presented by Cherrie Osborne, Director of Tourism, Antigua and Barbuda Tourism Authority.