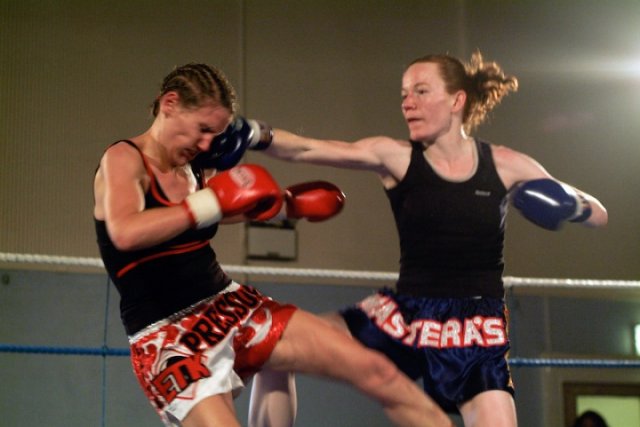 Rachael Mackenzie, who only started Thai-Boxing in 2000, topped the Women's Thai Boxing world rankings in 2006 in two weight categories (50kg and 52kg). Since then, she has also taken two British titles – both by knockout – and a European title. She is the first European Woman to have competed in traditional bare-knuckle Thai-Boxing in Thailand and the first woman to fight under full Muay Thai rules in the UK.

But Rachael's journey to success hasn't been easy. Throughout her career, she has faced prejudice from many people believing that women shouldn't be allowed to compete in contact sports. Her perseverance and determination to overcome these barriers has inspired many other women and young girls and she has significantly helped to raise the profile of female boxing throughout the UK.

Rachael will be visiting the Whitehouse Community Primary School and three Satellite Clubs to provide the same inspiration to young, under-represented teens living in and around the Ipswich area.

She will be delivering two assemblies for Y3/4 and Y5/6, encouraging the pupils to work hard, show perseverance and adhere to the school's moto "If you believe it, you can achieve it". At the Satellite Clubs; a Crossfit club at Westbourne High School, a Boxing club at Gainsborough Community Library and a Boxing club at Murrayside Youth and Community Centre, she'll be engaging in the sessions and showcasing some of her skills.

These Satellite clubs, which are aimed at 14-19 year olds, are three of many Satellite Clubs across the county funded by the Sport England Satellite Club Project, which is supported and delivered locally by Active Suffolk. The project was initially launched as part of Sport England's strategy 'Towards an Active Nation', and aims to increase the percentage of young people taking part in sport and/or physical activity.

The clubs provide enjoyable and convenient opportunities for young people to become more active but also support teens in many other ways; helping to improve their educational attainment, increasing their mental wellbeing and self-esteem and providing opportunities to learn new skills.

Both Rachael and Active Suffolk hope that her visits in Ipswich will help tackling declining emotional wellbeing in young people and will encourage them to always remain resilient in the face of adversity.