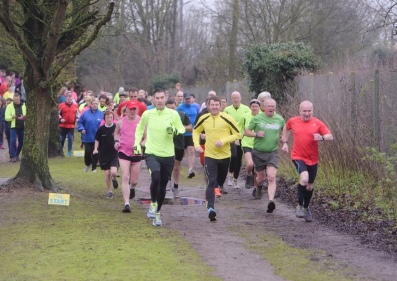 One of the most popular weekly social running events in the country could have to stop if the Needham Lake run cannot find new organisers.

After a year and a half of soaring numbers of runners and a growing number success stories, the organisers of the Great Run Local 2km and 5km Sunday runs are having to step down from running the event.

Bridget and Baz Goldstone were paramount in getting the run set up and have attended every weekend, Christmas and New Year's day since, as numbers grew from a few dozen to a few hundred every week.

However, the ill health of Mrs Goldstone's mother, who has dementia, and the weekly burden of bringing the run together is now proving too much for them to continue.

The couple, who have long had a passion for getting people into running and becoming active, are looking for people to come forward within the next month so they can hand over the reigns.

"There have been Great Run Local runs which due to a lack of volunteers and organisers have had to fold," said Mr Goldstone.

"With caring for Bridget's mum, we just can't carry on, but we really want to see it succeed in the future.

"We have more than double the number of people attending than even the next most popular Great Run Local in the country, it is a big event. We are very proud of how successful it is.

"The day itself is in some ways the easy bit, it is all the effort around that, handling the social media, organising volunteers and making sure everything comes together."

Around 300 people attend the run every Sunday, at 9.30am. There is a pool of around 25 volunteers who help on the day.

Organising the event is entirely unpaid. Mr Goldstone said there is a potential opportunity to "spread the workload", with a core group of three to five people taking the reigns for three or four weeks at a time.

"New people could actually make the event even more of a success, with fresh ideas," added Mr Goldstone. "It is a lot of pressure for two people to take and it has been very difficult for Bridget caring for her mum and organising this event. We need to take a step back."

• If you wish to volunteer, either as an organiser or helper, visit the volunteering page of www.greatrunlocal.org here.

• This Sunday runners are being encouraged to dress up for Easter