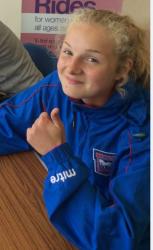 Topleader Georgie attended a camp in the Summer 2016, she was crowned as our 'Leader of Day' for her positive attitude and willingness to learn and help others during the camp. Her prize was a trip to the Anniversary Games in London, here is the story in Georgie's words.

Being asked to be a 'Topleader' in Year 8 when I was only 13 was a great feeling and definitely boosted my confidence. However, attending a day camp with a bunch of 14-17 year olds was a bit of a worry but the day was great! I fitted in the group really well; it was a group of people who loved sports as much as I do. At the end of the day there was a 'Leader of the day' award and to my surprise I was picked! The prize/reward was two free anniversary Olympic Games tickets and two return train tickets. For weeks I was looking forward to the day. Finally, once the day came I was ready, I had my hair in plaits (so I could have curly hair), an outfit already hung up and out to wear, bag packed and ready and camera fully charged. The night before was almost unbearable, I was so excited. Waking up to my alarm is usually horrible but I'd never got out of bed so fast.

The train there was great; I had a playlist that I downloaded for the journey. When we arrived in London we went through Westerfield and arrived outside the Olympic Park. Before we went inside we went to a really nice Mexican, open grill restaurant. After that, we walked across the bridge towards the Olympic Park which was probably my favourite part. Massive crowd singing and chanting and the view was great.

Once we were inside the stadium in our seats the atmosphere was electric and our seats were perfect! As we watched all of the nights' events it got better and better. There were lots of PB's beaten and we saw a world record beaten and a British record set! Usain Bolt's race was right in front of us! I screamed his name; got his attention and then he waved and winked right at me!

Overall the day was great and Mum enjoyed it too. Can't believe that such a good day out came from working hard at a day camp. All I can do is thank the Topleader Programme and hopefully continue being a leader.